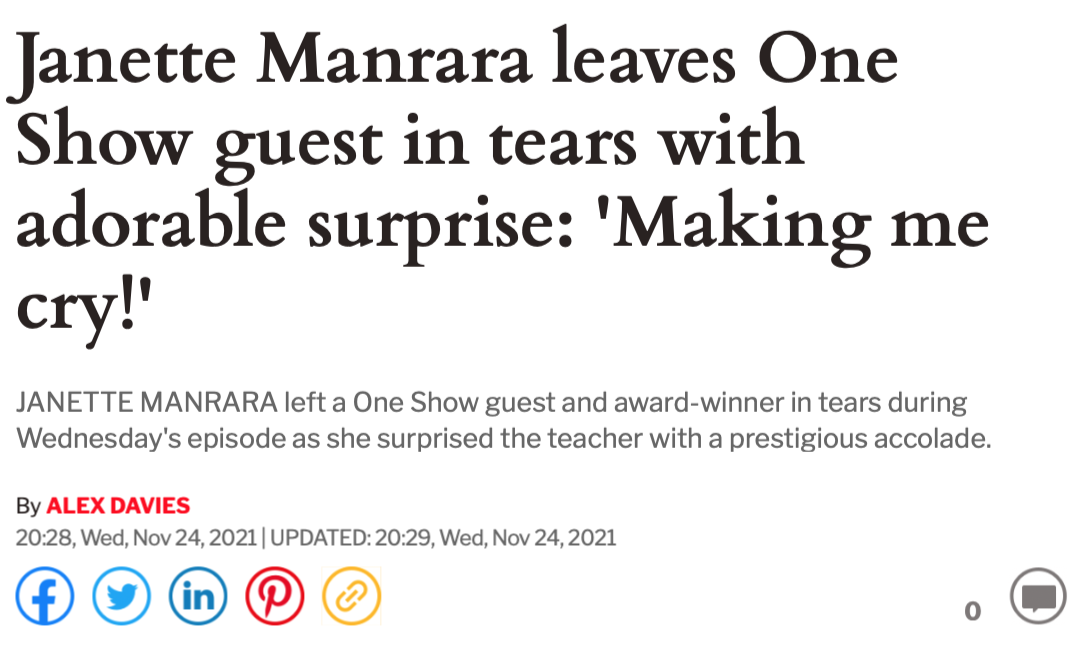 The Express: Janette Manrara leaves One Show guest in tears with adorable surprise: ‘Making me cry!’

BBC’s The One Show has been paying tribute to teachers up and down the country this year working alongside The Pearson National Teaching Awards. On Wednesday, it was the turn of the Teacher of the Year Award for a Primary School winner to be announced and hosts Jermaine Jenas and Lauren Laverne enlisted the help of Strictly stars Janette Manrara and Katya Jones to help out. But as soon as Janette appeared to surprise the winner, Jacqui Birch, it didn’t take long for tears to flow.

Kicking off the segment, The One Show reporter and former teacher Mehreen Baig filled viewers in by saying: “Jacqui Birch is an inspirational primary school teacher who brings fun and heart to everything she does. That’s why I am thrilled today to be at St Peter’s Church of England School in Wigan to crown her the Pearson National Teacher Award Primary School Teacher of the Year.”

However, to make the award extra special, The One Show had kept the victory a surprise as Mehreen added: “Although, she doesn’t actually know that she’s won yet.”

Mehreen then spoke to Jacqui’s students as well as the headteacher of the school who were all full of praise for her efforts in the classroom. Grabbing Jacqui for a chat, the primary school teacher was clearly passionate and full of love for her occupation. She told Mehreen: “I want to be able to influence and teach children and see that joy that they get from learning. I love my job, this is the best job in the world.”

Mehreen then revealed that during one of Jacqui’s tea breaks, Janette was going to drop an almighty surprise her way.

While Strictly pro Katya prepared to surprise Jacqui in the assembly hall, Janette interrupted her tea break by appearing on a TV in the staff room.

“Am I on Strictly?” a stunned Jacqui asked as the famous dance show’s theme music blared out from the TV.

Janette then popped up on-screen to say: “Hello, and welcome to a very special edition of It Takes Two celebrating a Strictly super fan.”

Jacqui gasped in disbelief as Janette’s message continued: “This teacher gets top scores across the board and her pupils think she A-maz-ing! Yes Jacqui Birch, I’m talking to you,” Jannete went on. “The work you do is truly wonderful and means so much to everyone at St Peter’s and if you make your way to the school hall, you’ll find there’s a little special surprise waiting for you.”

Overcome with emotion, Jacqui began to wipe away tears before making her way to the hall.

“Did you know that would happen?” a tearful Jacqui said as she walked down the corridor: “You’re making me cry.”

Once in the school hall, Katya and the pupils all cheered in celebration as they awarded Jacqui with the trophy.

But the surprises weren’t done there as singer Rod Stewart also made an appearance to surprise Jacqui.

In a pre-recorded message, Rod said: “Jacqui, I hear you’ve been dressing up as a rock star to teach times tables.

“Well, you’re definitely a rock star in our eyes. Congratulations on winning Teacher of the Year in a Primary School,” the singer added before blowing a kiss to Jacqui.