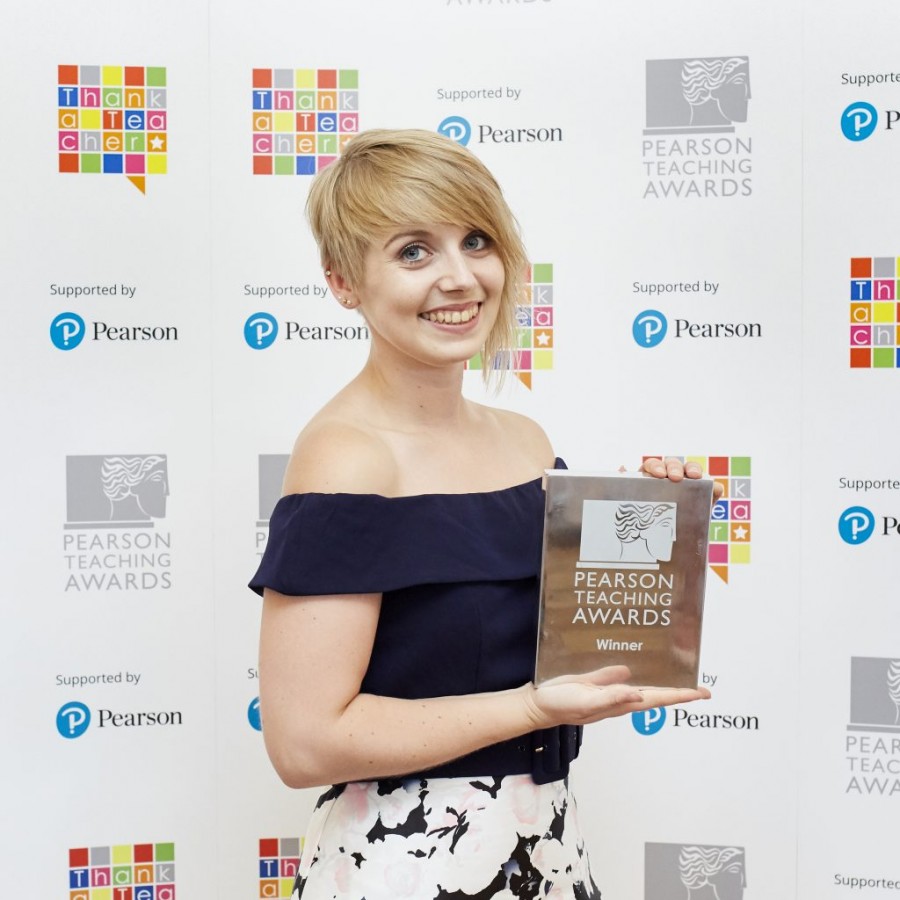 Charlotte GraceSilver Winner, the Award for Outstanding New Teacher of the Year, 2018

Heather CooperSilver Winner, The Award for Teacher of the Year in a Primary School, 2018

Charlotte Grace Silver Winner, the Award for Outstanding New Teacher of the Year, 2018

“The impact of this has been phenomenal”

I am still absolutely overwhelmed by being a 2018 Silver Winner in the Pearson Teaching Awards, one year on from the experience! The impact of this has been phenomenal; it has raised the profile of STEM and has also encouraged me to continue to try and innovate wherever possible within my day-to-day teaching.

One of the greatest memories of winning the Award was the presentation that Outwood Academy Shafton organised as part of ‘Thank a Teacher’ Day. This was very emotional as one of my students presented me with the award! Visiting Parliament with my colleague and friend was also an amazing opportunity, to meet with likeminded individuals who had also won a Silver Award. The main highlight was being a part of the Pearson Teaching Awards National Event which was televised as Britain’s Classroom Heroes. I didn’t know that my Business teacher from my time at Outwood Academy Freeston (formerly Freeston Business and Enterprise College), Ed Vickerman, was going to be there as alumni at the event – that was a brilliant surprise!

Over the last year I have been given the opportunity to continue my work with STEM across the Academy and particularly within the science department. We have a number of individual projects which will hopefully be going to the regional ‘Big Bang Fair Near Me’ events to promote their hard work.

Additionally this year, due to winning this award, I was given the opportunity to coordinate all Newly Qualified Teacher and trainee teachers across the Academy. This has involved putting together a bespoke training programme for all of these colleagues and ensuring they all feel supported and developed throughout their time at Outwood Academy Shafton. I have also continued to work with the year-long IOP funded Physics Teacher Subject Specialism training course, for science teachers delivering physics outside of their subject area.

This year, our Academy has been extremely successful and our students are moving from strength to strength. We have a successful Scholar’s programme designed to support our students with experiences within subjects they are passionate about. We have also done a large amount of work with HeppSY to raise aspirations with our students and increase engagement with higher education. As an Academy we are also working to increase students’ cultural capital. We have organised activities this year such as an art trip to Barcelona, theatre trips, “Love to Read” campaigns and our new Cultural Capital gallery which is hosting our first exhibition: Landmarks of the World!

Overall, any opportunity to be involved with the Teaching Awards should be taken, as it has been a wonderful experience for both myself and my Academy. I am proud to have been a part of the Pearson National Teaching Awards and have memories from these events to last a lifetime!

Heather Cooper Silver Winner, The Award for Teacher of the Year in a Primary School, 2018

Well it’s been a year since receiving the silver award and what a year it’s been. The process of being nominated and receiving a ‘Thank a teacher card’ was an awesome feeling. To know someone thought so highly of me and take the time out of their day to put me forward for the award was amazing. When my head teacher came into class to announce that I’d ‘got through’ to the next round I was completely overwhelmed.

The process of being assessed by the judges was one of quiet, calm observation. They came into my class to see our children busy at their work. There was no pressure they just wanted to see how I operate. Our activity for the afternoon was to recreate famous landmarks from around the world. We used sweets and biscuits for this and the children had a whale of a time.

Speaking to the judges was a pleasure. I was able to tell them about my life goals and achievements throughout my career. They put me totally at ease which meant I was able to share with them some of my most treasured moments of my teaching career.

One of the greatest moments of winning and receiving my award came as a complete surprise to me. I remember the day well. Our school was having an art parade at the end of an art week. Many people came along to support us as we marched proudly around the streets near our school dressed in the outfits the children had fashioned that week. The local Mayor and Mayoress of our town came along too, as did the local newspaper photographer from the Derbyshire Times. I believed we were being honoured with their presence but thought nothing more of it.

On arrival back at school we all gathered on the field and the head made several announcements. Then to my total surprise my family appeared and the head told me that I had gained the silver Pearson National Teaching award. I was totally shocked and surprised. The Mayor presented me with the award in front of many parents, the whole school and my family. I swelled with pride – words failed me.

Moving on from the award filled me with the self-belief. When our school took on a new way of thinking to help move our children on I spent much time creating inventive learning environments to inspire the young minds we teach.

This past year has seen my classroom turned into a historical wonderland where we taught about the Ancient Egyptians. A visit from a local reporter kick started our project which enabled the children to understand how a magazine is produced. The end product was my year 3 children launched a professionally printed magazine all about life in ancient Egypt.

In the spring term we had another awe inspiring project – we took the children on a geography trip around the world. Again my classroom was transformed. A large train was installed for the children to sit in as they did their work and a hot air balloon hung from the ceiling. Every corner of the room became a different country. The end project resulted in a large fantasy island being created and displayed in our local town centre. This attracted much attention including a tweet from the Geography Society. They are going to produce and article in their magazine early next year.

As a result of winning the silver award I have been inspired and developed a confidence to take my teaching to another level. Contacting the local paper is something I would never have done prior to receiving the award. The children are very proud of their school and love to see themselves in the paper, and our school has been rewarded many times with positive publications in our local newspaper. All this adds up to a feel good factor for our school and all who are part of it.