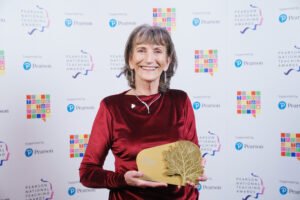 With the nomination deadline for the 2022 Pearson National Teaching Awards only days away, we caught up with Marie Lindsay, Gold Winner of our Lifetime Achievement Award for 2021. Her leadership of St Mary’s College has had a life changing impact on her pupils, their families, and the wider community.

Marie captured the hearts of the nation when she was featured on BBC’s The One Show, receiving a personal tribute from former US President, Bill Clinton.

Even the most reserved among us would struggle to stay dry-eyed watching her story play out. Marie has dedicated her life to teaching. And even though ill-health forced her to retire from much-loved profession during the pandemic, speaking to her now, the enthusiasm and passion she has for teaching just radiates.

How did you feel when you found out you’d been nominated?

Probably the best part was that I knew so little about it. And because I’d had to retire suddenly, we didn’t get to organise a proper farewell, so I think my colleagues thought this would be a lovely gift. To think that the principal and the two vice principals made time, during a pandemic – without a doubt the most challenging time in their careers – to pull this nomination together, meant the world to me. I get emotional talking about it even now. The nomination alone was an incredible, personal gift for me.

What were your thoughts when you found out you were a Silver Winner?

When I learnt I’d won the Silver Award I just couldn’t believe it. For me, I’d just been doing my job, so to get an award was mind-blowing. I was one of the first in my family to go to university and my first thought was that my mother and father would have been so proud to see it. We were a big family and to look after us wasn’t easy. They gave me the gift of generosity and opportunity, and I felt like this award was for them really.

And what was it like to win the Gold?

This was the biggest secret and the biggest surprise. I was completely hoodwinked! I thought I was giving a tour of the Science department, but they’d organised all my colleagues and family to be in the hall, with balloons. And Ronan Keating told me I’d won via video link – it was just unbelievable.

What was it like to be featured on the One Show?

Well, my family were asking me what I’d be wearing and I told them “don’t worry, I’ll be behind all the other winners” because I’m tall, I’m always at the back “you won’t see what I’m wearing!” I had no idea! I’d read about the work of the other winners and their careers were so inspirational. I felt I hadn’t done anything spectacular. To be in their company was lovely. And to be featured on the show was just unbelievable. I loved my job, but I didn’t feel I was exceptional in any way.

How do you feel about your career now?

At the time, I felt I was just doing my job, but being recognised by this award has led me to reflect a bit more on my career. And do you know what it is? It’s the team that makes it. I couldn’t have achieved half of what I had if I hadn’t had such a great group of colleagues to support me. And the entire community in Derry were so good to me. They carried me through difficult times and cheered me on when things were good.

How has winning the award affected the wider school community?

The award is an honour I share not just with the rest of the school but with everybody in Derry. And I know my colleague, Michael Allen, who also won the Head Teacher of the Year Award, feels the same. These awards have lifted the whole city – a city well known for its divisions.

So that one Friday evening on The One Show brought the city together by having Michael and me as recipients of Gold Awards.

The recognition we received that evening lifted us, but we could see it reached so much further than just the children in our school.

Can you tell us a bit about the message from Bill Clinton?

I think, if you’re not familiar with all the work Bill Clinton did behind the scenes to help bring peace to Northern Ireland and bring about the Good Friday Agreement, then you might not understand the significance of the message. But it wasn’t lost on me. So, it was extremely emotional.

Michael and I have discussed many times that we can work hard to get kids through exams, get them the grades they deserve, but they also need to be able to live together. And we’ve worked very hard to strengthen relationships between different parts of our community.

So, it was incredibly moving, and a great honour to have a tribute paid by Bill Clinton considering the work he’d done.

How was the Awards Ceremony in London?

Well, we’d all been locked away for two years because of the pandemic, so it was so lovely to be at a large-scale event. And the venue was breath-taking. My husband and I were in the company of my colleagues, and we had the best weekend. It was so inspirational to see the teaching profession celebrated with a bit of glitz and glamour. The room was filled with so much joy and gratitude for being recognised for doing a good job. Teaching is so fast paced that there isn’t often room to pause and celebrate. And teachers deserve this affirmation.

Can you tell us how the wider community was affected by the award?

Everybody – not just me – my family, friends, colleagues, no matter where we go, people talk to us about the award and say they saw me on The One Show! And the letters and cards I’ve received – they’ve just been incredible.  Our school is quite active on social media, and the response there was phenomenal. I’ve had messages from right across the community, from all levels.

We’ve had messages from local universities. And the mayor invited us to a special reception in the Guild Hall. The sense of pride from all parts of the community, from all shades of the political spectrum, and the business world, has been so humbling.

And I felt so pleased to be able to meet Ronan Keating. I was very poorly with cancer, recently, and I know Ronan and his family set up the Marie Keating Foundation in his mother’s memory. So, it was great to have that connection.

What would you say to a head reluctant to nominate for fear of singling out?

I understand that hesitation but all I can say is that if you think that people are worthy of recognition, an award nomination benefits everybody. It’s like a football team win – it’s not just the captain who gets the trophy. The whole team is celebrated.

And I wasn’t the first in my school. Gavin Malloy won a Silver Award back in 2014, and the whole school community was overjoyed for him. It wasn’t just Gavin’s award, we all shared in the celebration. We were all in the spotlight with him.

So, it’s not singling out. It takes a team in teaching. You can’t do your job half as well without supportive colleagues. And I noticed that the winners of the individual awards had their whole team with them at the ceremony. They had their picture taken with their whole crew and they wouldn’t have it any other way.

You might think you are holding up this one person, but what you’re really doing is reflecting the work of the entire team. It wasn’t just me who won that award, it was the people I had around me too.

If you know someone who’d be perfect for a Lifetime Achievement Award, it isn’t too late to nominate them for a Pearson National Teaching Award.

This award is for teachers who have dedicated their lives to the profession and are approaching the end of their career.