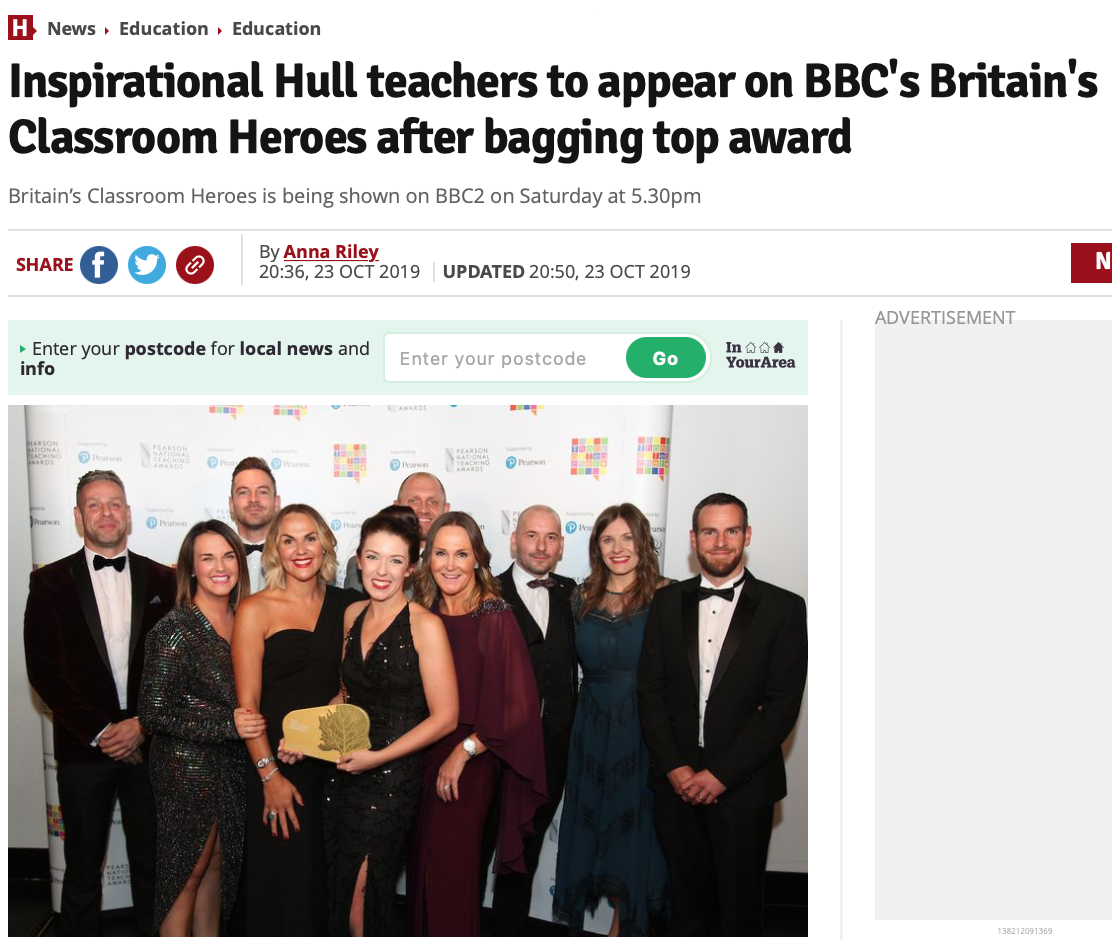 A team of brilliant Hull teachers have been honoured in a national award for all their hard work – and are set to appear on television.

Wyke Sixth Form College‘s department of sport, PE and dance led by Toni Knight, the department’s head, have been named as further education team of the year in the Pearson National Teaching Awards.

The team were selected from thousands of nominations and were presented with a Gold Award at Sunday’s prestigious awards ceremony on Sunday, October 20, which marks its 21st year of celebrating excellence in education.

The ceremony is being shown on BBC2’s Britain’s Classroom Heroes on Saturday, October 26 at 5.30pm.

“I went to university to do my teacher training and came back to be hired as an NQT at Wyke,” said Toni.

“I’m in my seventh year of teaching now and running the Sport, PE & Dance department with lots of support from above. It’s been an incredible experience.”

Operating in an area of high deprivation, the Sport, PE and Dance Team are a vital part of the college’s success.

The team’s impact can be seen by their consistently outstanding outcomes, including having 50 percent of their BTEC Sport students going on to university, the majority of whom are the first member of their family to attend university.

The sports team has gained recognition for its prowess, twice winning regional ‘Sports College of the Year’ and coming in runner-up to the national title.

The dance team has only recently joined the department but has already adopted their winning mentality. Despite being the only sixth form college to participate in the country’s largest dance competition, ‘That’s Showbiz’, competing against more than 200 dance schools, Wyke emerged triumphant at the Grand Final.

Julie Peaks, Deputy Principal at Wyke Sixth Form College, said: “Winning this award is indescribable. The team, led by Toni Knight, are some of the most passionate, hardworking and dedicated people I’ve ever had the joy of working with.

“It’s a testament to them that they’ve received national recognition, it’s phenomenal. But it didn’t matter to us as senior leaders, whether they won or not, because to us they were always winners.

“I’m incredibly proud of them. The students at Wyke are privileged to have them as teachers, both inside and outside the classroom.”

Michael Morpurgo, celebrated author and former Children’s Laureate, and President of the Teaching Awards Trust, said:  “They change the lives of the young people they teach and set them on a path, perhaps without ever realising that they themselves have become the role model, the people that are revered by their own students.

“So many are too self-deprecating to realise this, and that’s why it’s so important to celebrate them”.