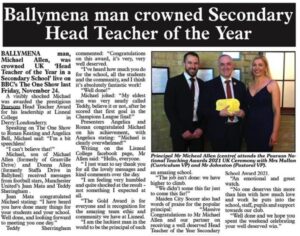 Ballymena man, Michael Allen, was crowned UK ‘Head Teacher of the Year in a Secondary School’ live on BBC’s The One Show last Friday, 24th November.

A visibly shocked Michael was awarded the prestigious Pearsons Head Teacher Award for his leadership at Lisneal College in Derry/Londonderry.

Speaking on The One Show to Ronan Keating and Angelica Bell, Michael said: “I’m a bit speechless! I can’t believe that!”

Juan Mata congratulated Michael saying: “I have heard you have done many things for your students and your school. Well done, and looking forward to meeting you one day.”

Teddy Sherringham commented: “Congratulations on this award, it’s very, very well deserved. I’ve heard how much you do for the school, your students and the community and I think it’s absolutely fantastic work. Well done!”

Michael joked: “My eldest son was very nearly called Teddy, believe it or not, after he scored that first goal in the Champion’s League final!”

Presenters Ronan and Angelica congratulated Michael on his achievement, with Angelica stating: “Michael is clearly overwhelmed!”

Writing on the Lisneal College Facebook page, Mr Allen said “Hello everyone. I just want to say thank for you all the lovely messages and kind comments over the day. I am feeling very humbled and quite shocked at the result – not something I expect at all. The Gold Award is for everyone and is recognition for the amazing team ethic and community we have at Lisneal. I am the luckiest man in the world to be the principal of such an amazing school. The job isn’t done: we have higher to climb. We didn’t come this far just to come this far!”

Maiden City Soccer also had words of praise for the popular principal: “Massive congratulations to Mr Michael Allen and our partner on receiving a well deserved Head Teacher of the Year in a Secondary School Award 2021. An emotional and great watch. No one deserves this more than him with how much love and work he puts into the school, staff, pupils and support towards our club. Well done and we hope you spent the weekend celebrating your well deserved win.”