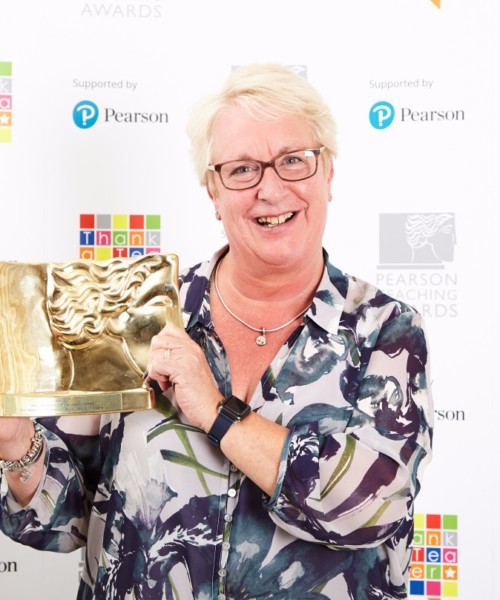 Being an Award Winner is very fresh for me, as I was a 2017 winner. It is probably only now that I can truly begin to reflect on the whole experience. I honestly had no idea how many people it would affect. Many of them I knew already, but others searched on the internet to find my school and then got in contact with me to say how much the film shown on the BBC about my work had affected them. I have a drawer full of congratulation cards which I shall treasure, and my friends who I trained with at Teacher Training College, 40 years ago, surprised me with a celebratory lunch. Probably the most random part of winning was my appearance on Sky Sunrise the next day……….how I did this I will never know . During the Awards weekend I repeatedly said ” Things like this don’t happen to teachers” . To be made to feel so special was such a thrill.

My return to school the day after the BBC broadcast was a particular highlight. Children were coming up to me with such pride and excitement. Many of them struggle with communication, but it was very clear how they were feeling. One of our boys who read the poem out at the end of the programme said to me ” Sue Jay we were on TV last night “. I visited each classroom with the Gold Plato, and it really felt like I’d won an Oscar. QEII is an incredible school, and for the students and staff to be seen by so many people on national television makes me so proud. For schools and teachers to be recognised in such a positive way is something the “Teaching Awards” should be very proud of.

Winner of the Award for Excellence in Special Needs Education, 2017