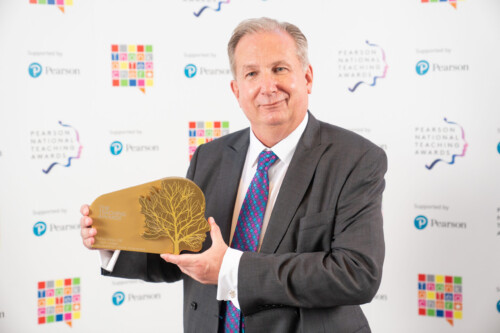 Dr Paul Philips CBE has transformed Weston College into an Outstanding institution. In 2017 Paul was recognised as one of seven National Leaders of Further Education, and in 2019 he was named TES FE Leader of the Year.

Paul’s great interest in SEND won a Queen’s Anniversary Prize in 2018, and the college became a national SEND Centre for Excellence in 2019. Students with special educational needs at Weston College achieve progression rates similar to those of all students across the country, and he has worked closely with local businesses to ensure a strong pipeline into the local workforce in an area of high deprivation and low aspirations.

Paul’s Body and Mind strategy was a key factor in being awarded a place on the Young Minds “Amplified Trailblazer” program, as well as  the college winning a National AoC Beacon Award for Mental Health & Wellbeing in 2018 and the 2019 Lloyds Bank National Employer of the Year. Paul’s significant investment in digital since 2015 led to the College being recognised as a Microsoft Showcase College.