Anne Bull Winner, Headteacher of the Year in a Primary School, 2012

Home / Winners / Anne Bull Winner, Headteacher of the Year in a Primary School, 2012 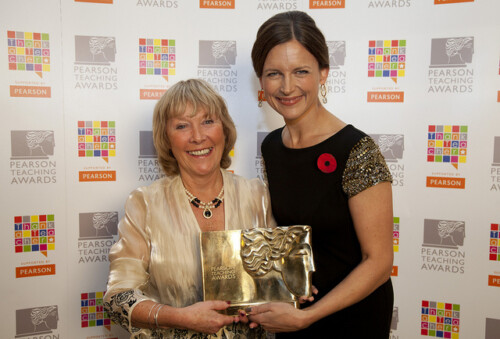 ” I just love the variety of the role and working with children – what’s better than that privilege?”

I was overwhelmed when I won the award! It was a huge surprise and the first thing that happened was that the local BBC wanted to do an interview with me, I naively thought that is was nothing to do with the award and it didn’t even cross my mind! When I won it was such a whirlwind, it was very exciting with a huge media presence – I remember the following morning that I could hardly get to breakfast as there were so many people trying to interview me!

In between everything that was going on I was heavily involved in organising the Queen’s visit to Bath Primary Schools, which led onto the Public Sector Hero of the Year Award at the Bath Pride Awards in 2013 and then an Honour of the City with two mayoral receptions. It really was an exciting and amazingly proud time for me.

One thing I did not realise was that after my award I became a Pearson Teaching Awards Fellow, and I went on to do the Teaching Awards for the South West, which I found very interesting and highly enjoyable.

It was an honour to be recognised and awarded publicly for something I love but it didn’t change how I felt about my job, it confirmed why I wanted to stay.

My career began in Wiltshire in a tiny village school in Worton and Marston, after that I worked in Melksham in four schools which amalgamated to become one. I first became a headteacher in Thomas a Becket Primary, a lovely little village school in Tilshead on Salisbury Plain. I was 28 at the time and apparently was the youngest head in the country! I have also been headteacher at Westbury Leigh. I have been headteacher at Weston All Saints Primary School for over 25 years and won the Teaching Award in 2012.

I’d always wanted to be a teacher, ever since I was a little girl, but also more seriously when I was in 6th form and we lived in Africa. I taught some African children from the local village how to read!

THE JOB, CHANGES AND CHALLENGES

My teaching style has changed over the years but only to accommodate Government requirements.  Narrowing the curriculum at the expense of children’s centred learning and discovery. There has been a continued decline in the Arts in primary age learning, which has been catastrophic. It was around this time, or just before, that I set up the Bath Primary Schools Arts Festival.  I have always believed passionately in the Arts in Primary Education, and I have always included it from when I was a full-time class teacher and ever since I became a Headteacher some 30 years ago!

At Weston All Saints Primary School and Abbot Alphege Academy, the whole school curriculum is based around the Arts, Culture, Heritage and Locality and throughout the curriculum the arts are the woven thread.

It is important to become involved in as many arts opportunities as possible and offer high quality learning opportunities to children ie we have made discs at real world studios, performed with AMJ Collective, set up art exhibitions at Royal United Hospital in Bath.

If children are not introduced to the arts from a young age they are less likely to discover them or get involved as adults. If there are any gaps in the arts for children I look to fill the gap by providing and expanding on opportunities, for example at our new school we are having some interesting art installations and I would not consider a project that did not involve the children’s artistic input – their input and ideas are incorporated into the Sundial Project, they are involved in the Hermit’s Cave and Well, their artistic input is in the hoarding around the building site that the school is on – it’s about involving the children and giving them opportunity.

The pastoral care offered by schools is now a much bigger part of the job, but this is due to changes in our society. One of those is the increasing use of social media but when used wisely it can be beneficial.

I am very proud to have received a number of awards including the South West and National Headteacher of the Year Award, then the OBE for Services to Education, and then to be awarded a Bath Spa University Doctorate for Services to Primary Education, the Arts in Education and actively promoting and developing leadership in primary education.

And I have been lucky to have some very special relationships with former pupils, particularly my last class when I was a teaching head in Westbury, they have all gone in to do amazing things in their lives and now and then get in touch to let me know what they are up to – or their parents do get in touch!

My previous pupils will frequently drop in, one just last week in fact, and everyone is surprised at how small the furniture is! It seemed so much larger when they were pupils. It gives me great pride to know how well they have got on in life. From my time in Westbury, one has gone on to be a journalist, another solicitor and another, a teacher. One of the boys from WASPS, who took part in a solo dance piece I organised at the Theatre Royal in Bath has become the deputy deadteacher of a secondary school, he is a performing arts specialist and recently invited me to his wedding! As I said, it gives me such pride.

I would advise new teachers to keep positive! Don’t let yourself get so tired that you lose your enthusiasm! And always be prepared, and be able to stand your ground when questioned about something you believe would be beneficial for your pupils or your own career.   The fact that my headteacher wouldn’t let me take a class to Stratford-upon-Avon to see a Shakespeare play upset me greatly in my early teaching career. I realised, years later, that I should have prepared myself better so that I was in a position to fight my corner for why it was so important to take the class,

Over the years I have witnessed much more monitoring but also much more support – for example, we did not have classroom Teaching Assistants, we were on our own in the classroom every day and did not have PPA. If monitoring and workload were reduced, and the fear of OFSTED then I’m sure more people would stay in the profession but for me I just love the variety of the role and working with children – what’s better than that privilege?