Back to class! 27 ex-pupils return to their old high school… as TEACHERS (from the Daily Mail)

By BHVISHYA PATEL FOR MAILONLINE, 6 January 2020

Back to class! 27 ex-pupils return to their old high school… as TEACHERS

A line-up of 27 former pupils are back at their old high school for the new term – because they are now members of staff there.

Former school pupils of Ysgol Cwm Rhondda school, in Porth, Wales, who make up almost half of all the teaching staff in roles from deputy head to learning support, have celebrated their return to the school by posing for a reunion class photo.

Headteacher Rhian Morgan Ellis, 57, who grew up in the former mining community in Rhondda, South Wales, before going on to run her old school, has now hired the former pupils on her staff to teach the new generations of children at the 750-strong school.

Ms Ellis, who was named UK headteacher of the year at the Pearson National Teaching Awards, said: ‘It is the kind of place that once you’re here it grabs you, that’s because there are such positive relationships.’ 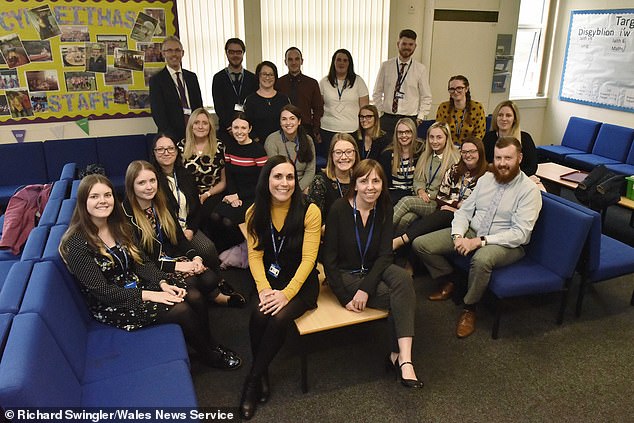 Among the former pupils is Amy Morgan (left now and right as a pupil), 29, who started her career as a music teacher by returning to her old school

One of Ms Ellis’ latest recruits is learning support assistant Amelia Davies, 19, who only left Ysgol Cwm Rhondda two years ago after finishing her exams.

She said: ‘It’s a lovely place to work, it’s like we’re a big family.

‘Going from pupil to staff wasn’t hard. As a headteacher, Rhian was always approachable and easy to talk to, and as a member of staff this is still very true.’

Meanwhile music teacher Amy Morgan, 29, who started her teaching career by going back to her old classrooms, said: ‘As a pupil I had a positive experience at school. I enjoyed lessons and the school supported me in every way.

‘Music was my favourite lesson and the lessons inspired me to become a music teacher.

‘I was welcomed back with open arms.’

Deputy headteacher Craig Spanswick, 37,  (left now and right as a pupil) began his teacher training at the school in 2004

Also among the former pupils who is now a teacher at his old school is music teacher Owain Harris, 39, (left now and right as a pupil)

Finance officer Elen Perry (left now and right as a pupil), 34, was once a pupil at Ysgol Cwm Rhondda, but now works as a member of staff there

Meanwhile Amelia Davies, 19,  who only left Ysgol Cwm Rhondda two years ago, has returned to become a member of staff

Elsewhere Craig Spanswick, 37, who taught six of his colleagues when they were pupils, began his teacher training at the school in 2004 and is now deputy head.

He said: ‘You can describe the school as a family. All the opportunities I was provided as a pupil I wanted to give back.’

‘Arriving as a newly qualified teacher in 2004, Craig said: ‘It never felt strange because no-one made it feel strange, it’s such an inclusive school.’

‘Rhian pushed me constantly as a pupil and then as a work colleague.

‘She is the reason I decided to become a teacher and why my children are now brought up through the medium of Welsh. I wanted to have that impact on the pupils I teach.’

Headteacher Rhian Morgan Ellis (pictured), 57, hired the ex pupils on her staff to teach the new generations of children at the 750-strong school
The school, which is located in Porth, sees pupils and staff members speak in Welsh